A visit to Flint Castle has got a lot going for it. It's free to park. It's free to go in and enjoy the lawns and inspect the ruins. And it has breathtaking views over the Dee Estuary. It's also on the Wales Coast Path, and you can walk either east or west and enjoy a well defined route with a good surface.

Flint Castle, was the first to be built by Edward the First after his conquest of Wales, with construction work beginning in 1277. Primarily made of millstone grit and sandstone, the castle has an inner ward and an outer bailey, separated by a tidal moat which is bridged by a gatehouse and drawbridge. 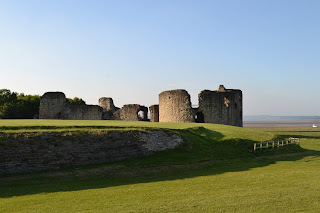 The inner ward of the castle has 3 large corner towers. The fourth tower was turned into an even larger isolated keep, itself sealed by a drawbridge which could have been raised to prevent entry if the rest of the castle was taken. This sort of design was copied from mediaeval French castles, and was unique in Britain. 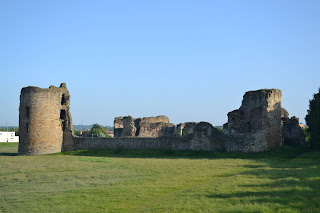 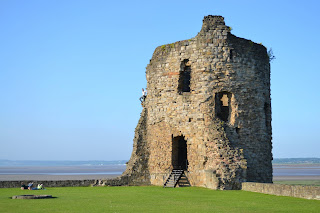 Today the castle is quite badly ruined, thanks to its colourful history as it was beseiged by Dafydd ap Gruffydd in 1282 and again by Madop ap Llywelyn in 1294, when the castle constable was forced to set fire to it to prevent the castle being captured and used. The castle was later repaired, but was damaged again during the English Civil War. The Parliamentarians captured it from the Royalists in 1647, and then partially demolished it to prevent anyone from reusing it. The current ruins are all that's left from that conflict.

Other famous historical evens at the castle include the capture of Richard the Second by Henry Bolingbroke, (soon to be Henry the Fourth) in 1399.

Posted by Walking North Wales at 08:03