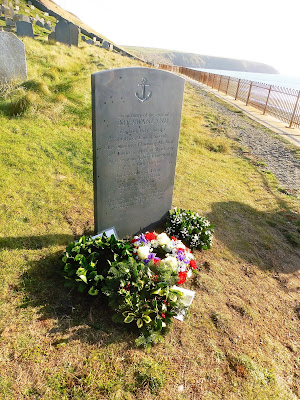 Sunday 27th November, was the 5th anniversary of the tragic sinking of the MV Swanland, which resulted in the deaths of 6 Russian men. The ship was loaded with stone on passage from Llanddulas to Cowes when it was caught in a storm, just a few miles off Bardsey island. Despite the launch of all local RNLI lifeboats and RAF helicopters, only 2 members of the crew survived.

The service of dedication was conducted by Father Huw from Pwllheli on a cold but very bright morning. Susan Fogarty recited a poem written by R.S. Thomas.

You are there also
at the foot of the precipice
of water that was too steep
for the drowned : their breath broke
and they fell. You have made an altar
out of the deck of the lost
trawler whose spars
are your cross. The sand crumbles
like bread ; the wine is
the light quietly lying
in its own chalice. There is
a sacrament there more beauty
than terror whose ministrant
you are and the aisles are full
of the sea shapes coming to its celebration. 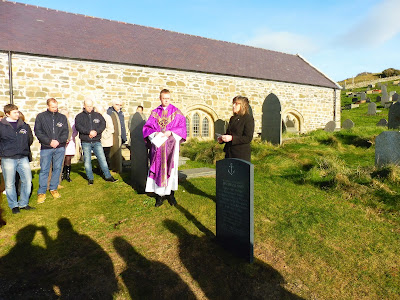 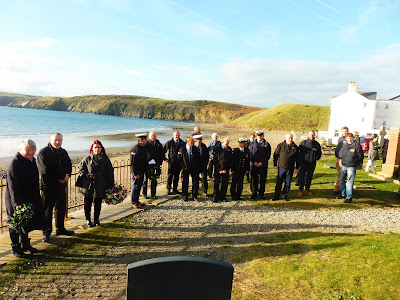 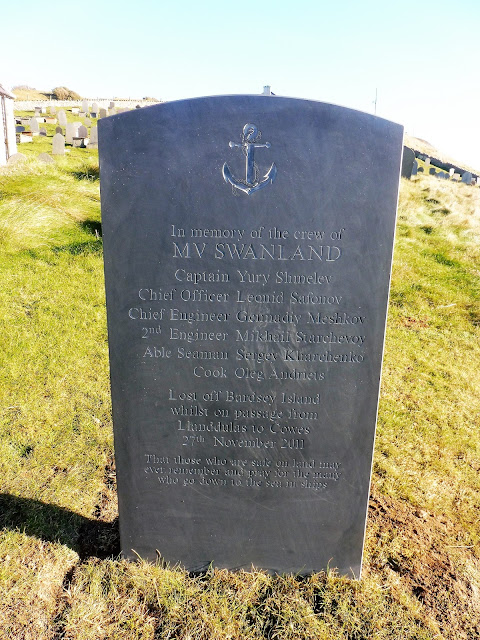 The ship was built in the Netherlands in 1977. Originally named Carebeka IX, she was renamed several times. The vessel was last owned and operated as Swanland by Torbulk, a company based in Grimsby, and was registered in the Cook Islands as a flag of convenience. She was 266 feet long and 46 feet wide with a draft of 11 feet, and displaced 2,180 tons.

In 2010, she narrowly avoided grounding off Lizard Point, Cornwall, after her engines failed and she had to be taken in tow by the emergency tow vessel Anglian Princess and towed into Falmouth.

Swanland sank in a gale force 8 storm in the Irish Sea 10 miles off the Lleyn Peninsula, Gwynedd at approximately 0200 on Sunday 27 November 2011. She was carrying limestone from Raynes Jetty near Colwyn Bay to Cowes on the Isle of Wight.

Two of the Russian crew, Roman Savin (26), and Vitaliy Karpenko (48), were rescued during the sinking with Prince William taking part in the rescue mission. A third crewman, Chief Officer Leonid Safonov (50) was later found dead during a search for survivors. The rescued crew described how a large wave broke the ship's back.

On 11 December 2011 the BBC reported that Swanland had been subject to repeated safety concerns due to unsafe loading and unloading practices that placed may have placed stress on the hull. The Marine Accident Investigation Branch (MAIB) conducted an inquiry into the sinking and published its report on 27 November 2011. The synopsis of the report was as follows:

At 0200 on 27 November 2011, the 34 year old Cook Islands registered general cargo ship Swanland experienced a structural failure when heading directly into rough seas and gale force winds while on passage from Llanddulas, Wales to Cowes, Isle of Wight with a cargo of limestone. The vessel sank about 17 minutes later. Two of the vessel’s eight crew managed to swim clear and were rescued from a life raft. The body of the chief officer was recovered from the sea during an extensive air and sea search but the remaining crew were not found. There was no significant pollution. The wreck of Swanland was subsequently found 12 miles off the Welsh coast in a depth of approximately 80m. Sonar and underwater surveys showed that the vessel was inverted on the seabed; the hull appeared to be in one piece. The upper part of the vessel’s structure had failed in the midships region, on both the starboard and port sides. The investigation identified that the major factors contributing to the structural failure were:
• The limestone was a high density cargo that had been effectively loaded as a single pile within the central section of the hold. As a result, significant stresses were generated in the vessel’s midships section.
• The stresses in the midships section were exacerbated by the rough seas in which the wavelength was similar to the length of the vessel.
• Swanland’s longitudinal strength had probably weakened significantly over the previous 2½ years through corrosion and wastage. The maintenance and repair of the vessel had lacked focus and oversight; no structural repairs had been undertaken since 2009.

Other contributing factors included: non-compliance with the International Maritime Solid Bulk Cargo Code, insufficient loading information, a lack of effective safety management, poor quality of survey and audit, lack of oversight of the classification society by the Flag State and the financial pressures of operating this type of vessel in the current economic downturn. The investigation also identified several safety issues concerning the immersion suits and lifejackets available on board the vessel. Sadly, none of these factors are new. Swanland is one of 248 general cargo ships that are known to have foundered worldwide since 2002 with the loss of over 800 seafarers; 226 of the vessels were 15 years old or more, 139 of which were 27 years old or more.

Posted by Walking North Wales at 08:14 No comments:

Looking Back on Sacred Land


Our guest blog is written by Tim Higgins and opens up the experiences of the Sacred Land weekend we shared in October.

Etched into the natural landscape of the Llyn Peninsula is a story of human awe and wonder. Bridging the distance between bird life and our own life is what happened as Mary Colwell told a story of faithful devotion between mating pairs of birds. She made us both chuckle and charmed as we pictured the impetuous flapping of a late arriving male-mate from a long migration. The distance between us, twenty-five very different week-enders, was also bridged as we were drawn in by stories rising from this landscape. 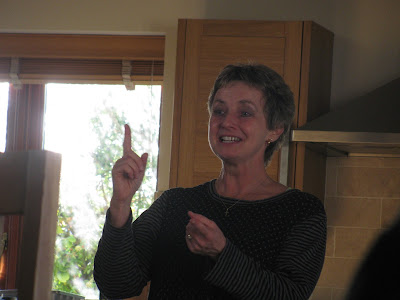 Mary’s expert passion for the story of the earth and its creatures moved us. So we walked and talked, we moved from ‘head to heart to hand’ reflecting on what we eat, how we shop, care and share with the natural world. 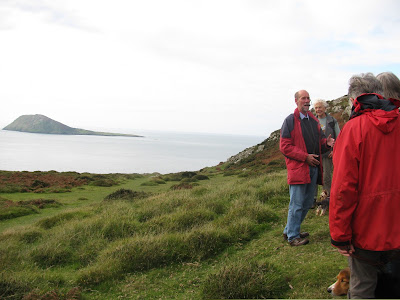 The gaze from the tip of the peninsula with an eye on the holy Isle of Bardsey took our imaginations flying. Martin Palmer got us airbourne with images of the cosmos and how our ancestors, like us, built legacies with wells and monuments. He helped de-code such legacies as that point to Sun and stars like signposts to our home on the Earth. 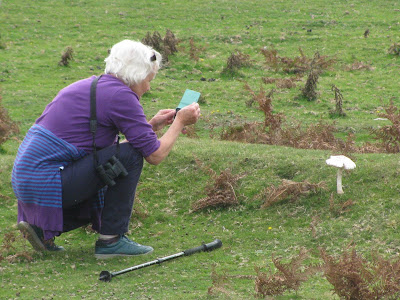 Looking down, as well as up, the landscape revealed its secrets. Much for the ‘head’ to think upon; more the ‘heart’ to reflect upon. 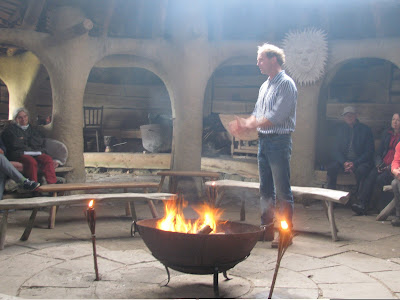 Stories we tell about our place in the landscape often come from the heart. These same stories guide our hand in holding things we value. Our time at the Pen Llyn’s Earth Centre, Felin Uchaf, came alive in the Roundhouse with storyteller Dafydd Davies-Hughes. Enchanted and transported we felt how inherited stories can shape our life together. 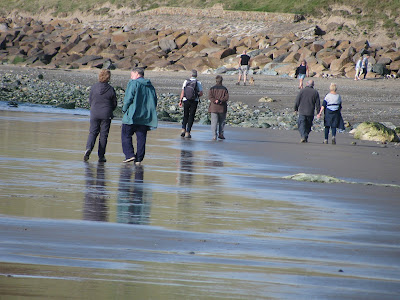 Walking the shoreline, the ‘in-between place’ between soil and sea, is life giving for waders. It is also an effective space to contemplate our place on a planet of wonder and fragility. 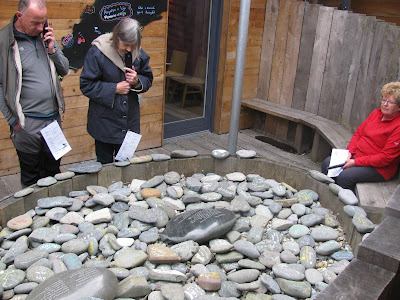 For some, the three days seemed busy with getting to places and listening, but time to contemplate, ‘still-time’ for reflection, mattered as much. The National Trust Centre in Aberdaron supported generously in letting us ‘do our own thing’ – after hours. ‘The Deep’, part of their Porth y Swnt imaginative, interactive space stimulated our reflection and still-time. 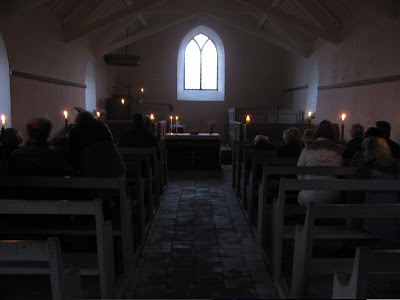 Dawn inside the Penllech Farmyard church building, now out of regular use, went deep for many. The stars saw us at the start, and then the sound of birds and the sun rising to light the east window lifted our soul A lone voice spontaneously sang in greeting chant. Everyone lingered lest we should loose the moment.

“Friendships were formed. Emails have followed. Friendships with the natural world, the ‘sacred land’, have taken a further step for a unique group who gathered to ‘take the mind into the heart’ and did so with big smiles and renewed energy for life back home.”

– Tim Higgins, Franciscan Tertiary and Anglican priest, led the weekend in collaboration with Edge of Wales Walk in Aberdaron. [ tim.tssf@gmail.com ]

Posted by Walking North Wales at 04:34 No comments: