The North Wales Pilgrim’s Way which stretches for 240km across the region has been officially launched at Porth y Swnt, Aberdaron.

The path linking St Winefride’s Well at Holywell to Bardsey Island makes full use of existing footpaths and sections of the Wales Coastal Path. Following in the footsteps of centuries of pilgrimages to Bardsey, the path is an opportunity for modern day pilgrims to follow the path whilst visiting many interesting historical sites along the way and to marvel at the area’s natural environment.

The North Wales Pilgrim’s Way is a part of the Our Heritage project, a part of Cadw’s Heritage Tourism Project partially funded by the European Regional Development Fund through the Welsh Government. The Our Heritage project aims to maximise the economic and cultural value of north Wales’ local heritage by working towards ensuring that visitors and local communities have lasting experiences by bringing local heritage and history alive and relevant to today’s population.

“I’m confident that the North Wales Pilgrim’s Way will attract many more visitors to the area, as does the Camino de Santiago in Spain every year which inspired the re-establishment of this historical route.”

The official launch at Aberdaron was part of a series of events held across north Wales on 10 July to celebrate the official opening of the North Wales Pilgrim’s Way including events at Basingwerk Abbey in Flintshire, St Asaph Cathedral and Bangor Cathedral.

“I was extremely glad to take part in the launch of the North Wales Pilgrim’s Way, as the Pilgrim’s Way is a great opportunity to showcase some of North Wales’ most remote and beautiful countryside and historical sites.

“I hope the improvements to sections of the path and the instalment of digital hubs will encourage walkers and modern day pilgrims to follow the historical path all the way from Holywell to Bardsey, just as so many have done before them.”

A series of digital hubs have been developed and installed at many locations along the route of the Pilgrim’s Way. These hubs will display the new Pilgrim’s Way website and information about local history of the surrounding area.

From now until the end of August, an exhibition of work by local school children to develop stamps for the Pilgrim’s Passport will be shown at Oriel Pendeitsh, Caernarfon.

For more information about the North Wales Pilgrim’s Way, maps and route description from Holywell to Bardsey visit: www.pilgrims-way-north-wales.org

To learn more about the Our Heritage project visit www.snowdoniaheritage.info or contact the Our Heritage team by emailing OurHeritage@gwynedd.gov.uk or phone 01286 679194.
Posted by Walking North Wales at 06:53 No comments:

Flintshire Interactive mapping on the way!

Walking North Wales have been commissioned by Cadwyn Clwyd and Flintshire Council to convert the information on the Rural Walks in Flintshire brochure to an interactive format that can be put up on the internet. The routes are all being checked and photographed by the Flintshire Ramblers. This work is now under way and the first results can be seen on the new website: 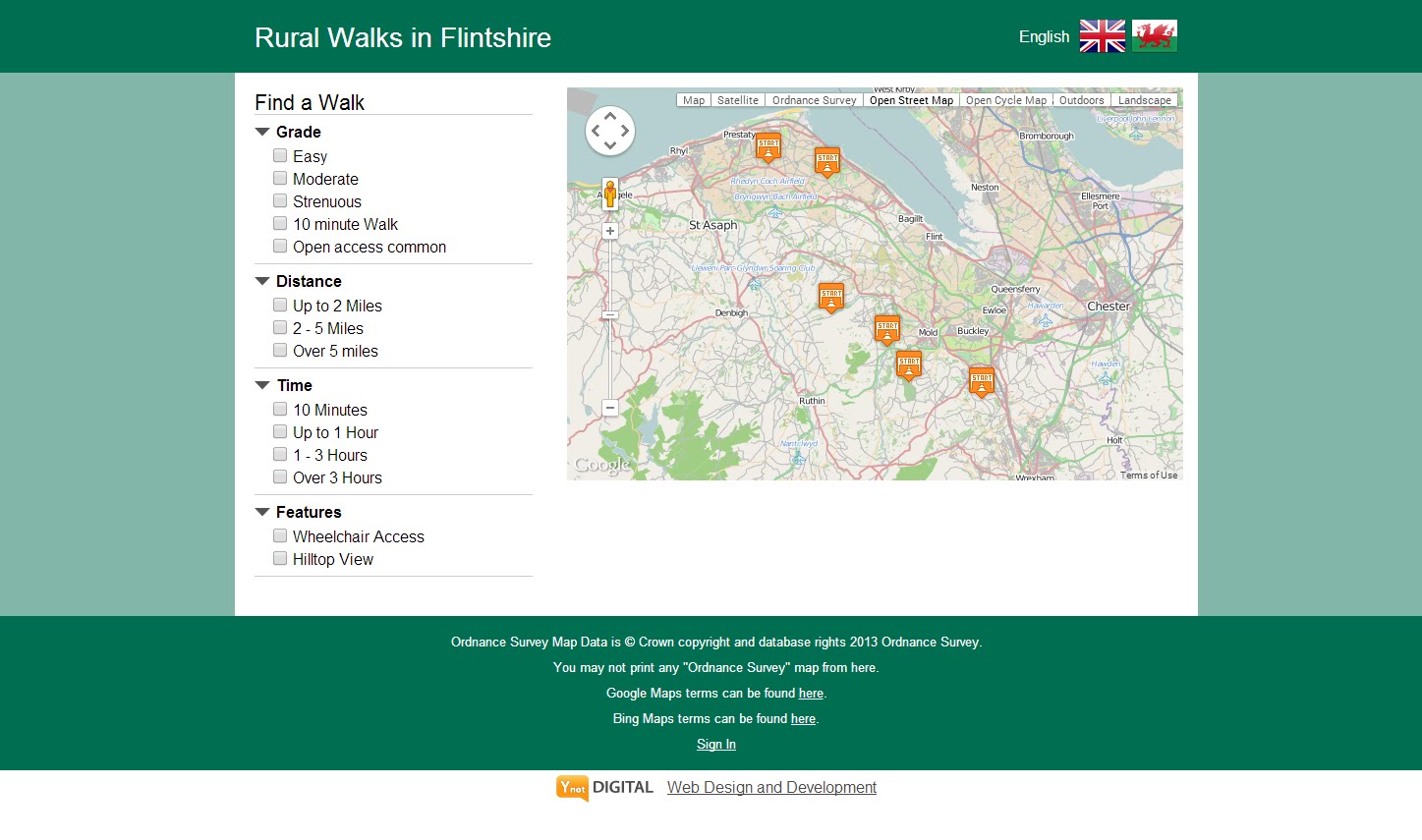 The home page of the site allows users to display only those walks that meet their particular criteria, such as being of easy, moderate or strenuous difficulty, or of a certain length. At the moment the site hosts 6 of the walks in various stages of completion.

We think this project shows local government (Flintshire), local agencies (Cadwyn Clwyd), local volunteers (The Ramblers), and tourism agencies (Walking North Wales) all working together with private enterprise (Ynot Digital) all working together to produce something really worthwhile - the best walking websites in the country.
Posted by Walking North Wales at 06:45 No comments:

The Princes of Gwynedd

I was on my way to the start of the Watkin path near Beddgelert and was passing Craflwyn, and called in to see if the Princes of Gwynedd exhibition was yet up and running. I am delighted to be able to report that it is both working and a very impressive little exhibition. The wall displeys would introduce a new comer to the lineage of the Princes of Gwynedd and they might learn something about the importance of these princes to Wales. The video (where the viewer has a choice of films) is working and is of a high standard.
You could combine this visit with walks around the grounds of Craflwyn Hall and the woods above the house.

Posted by Walking North Wales at 06:13 No comments:

The Walking North Wales team have got together with the Llŷn Archaeological Trust, Aberdaron Link and the National Trust to create a geocaching trail around the western end of Pen Llyn. Details of all the caches can be found at Geocaching.com (search for Aberdaron). If you haven't got a GPS or you are new to this new sport then you can borrow one of 3 units which are available free of charge from the Porth y Swnt National Trust centre on Aberdaron car park.

This GPS trail is essentially both a treasure hunt (each cache contains interesting swap items) and a tour of the historic sites of this area. You are taken to a 19th century quayside, a mediaeval house platform, an Iron Age dwelling, the site of a mediaeval church and well, a 2nd world war observation post, a 2nd world war military camp, a non-conformist chapel, an ancient well, a secret nuclear bunker and an ancient corn mill. There is a cache at each place containing information in both Cymraeg and English. The trail was declared open today and the first 10 people to complete this treasure hunt will be able to claim a prize from Porth y Swnt.

Posted by Walking North Wales at 02:41 No comments:

The Wales Coast Path comes inland at Dinas Dinlle to join the A499 heading south west. A very brief diversion north east takes you to the pretty estate village of Llandwrog, where there is both an excellent church and a fine pub, both of which are open on a regular basis and can provide sustenance for the soul and the stomach before tarmac bashing on the A499. 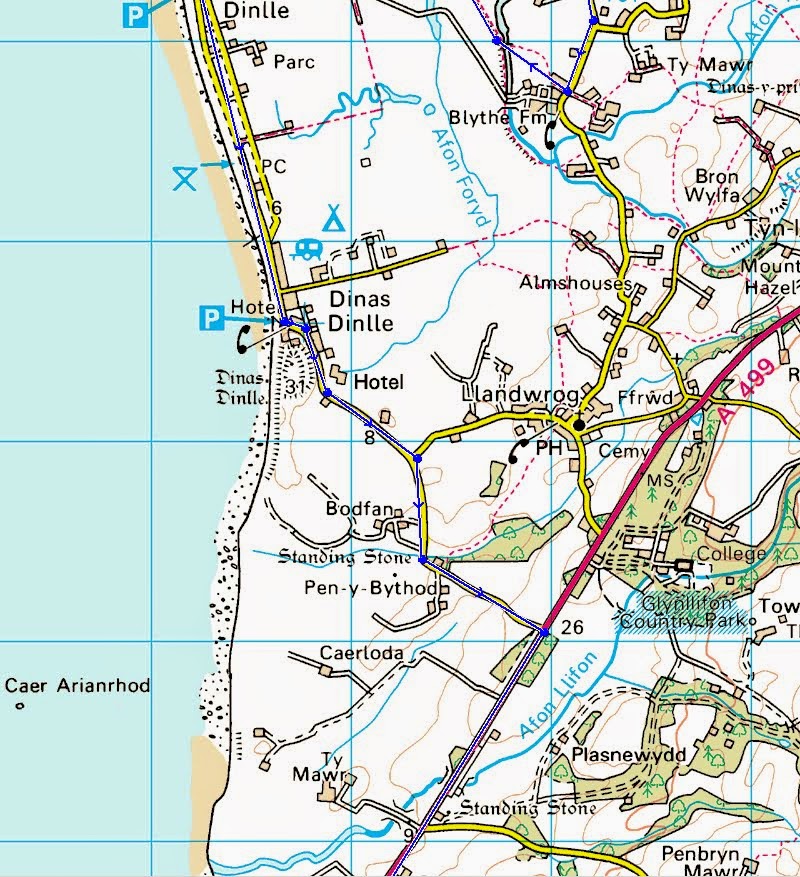 Posted by Walking North Wales at 08:05 No comments:

Relief from the A499 on the Wales Coast Path 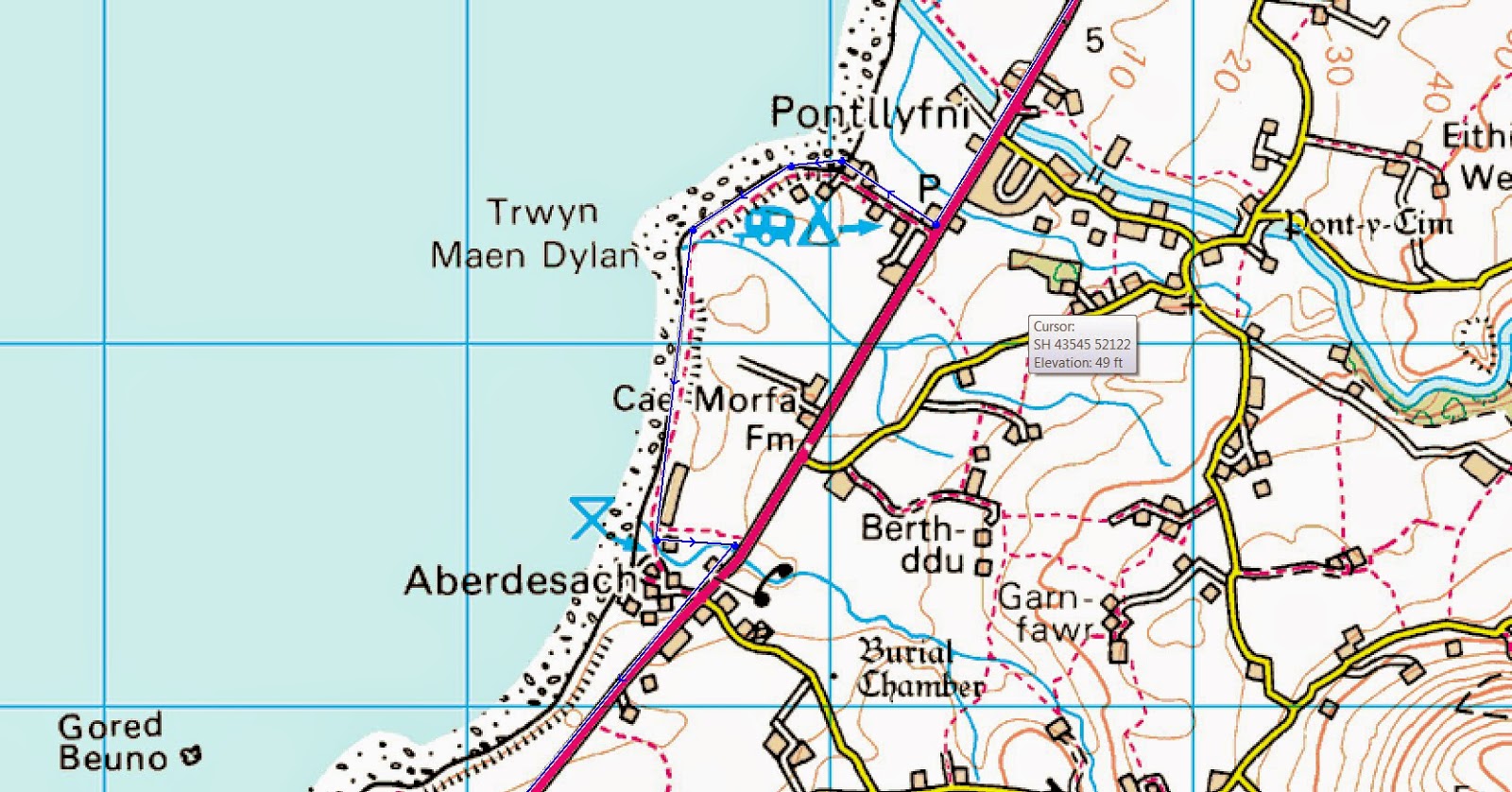 I was walking along the A499 Caernarfon to Clynnog Fawr road after my adventures in Llandwrog. This is a very lengthy tarmac stretch between Llandwrog and Clynnog Fawr. The actual path is along a cycle track, so you are not at risk of being run over, but traffic goes at a frightening and noisy pace, and it was with some relief that I got to Pontllyfni and headed for the coast for a small loop that takes you back to the road at Aberdesach. This is only a 1.5km stretch but it was welcome nevertheless.

An interesting landmark can be found on the single track road between Llithfaen and Nant Gwrtheyrn. On the little plateau on the crest of the hill, next to the car park, there are three standing stones, decorated with swirling carvings. As much as I would like to tell you that these are important, neolithic artefacts, marking a sacred site that was occupied for thousands of years, I'm afraid that they were installed just a few short years ago, during the refurbishment of Nant Gwrtheyrn. However, they are undeniably striking, especially with their engraved markings that are meant to resemble genuine stone age art. 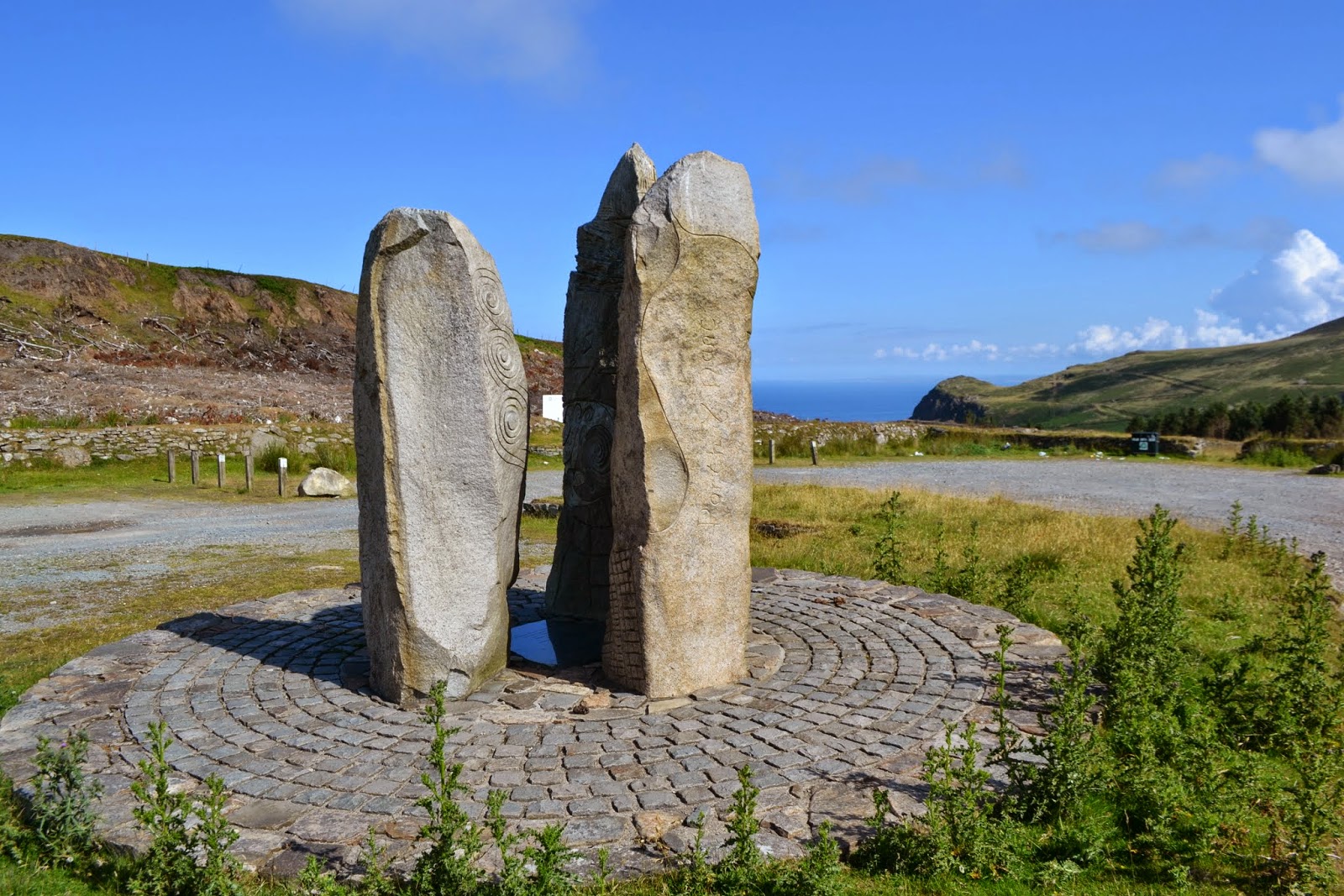 In between the three stones is a piece of polished stone, inscribed with a poem in Welsh - "Ar lwybr chwarel", or "On the Quarry Path". 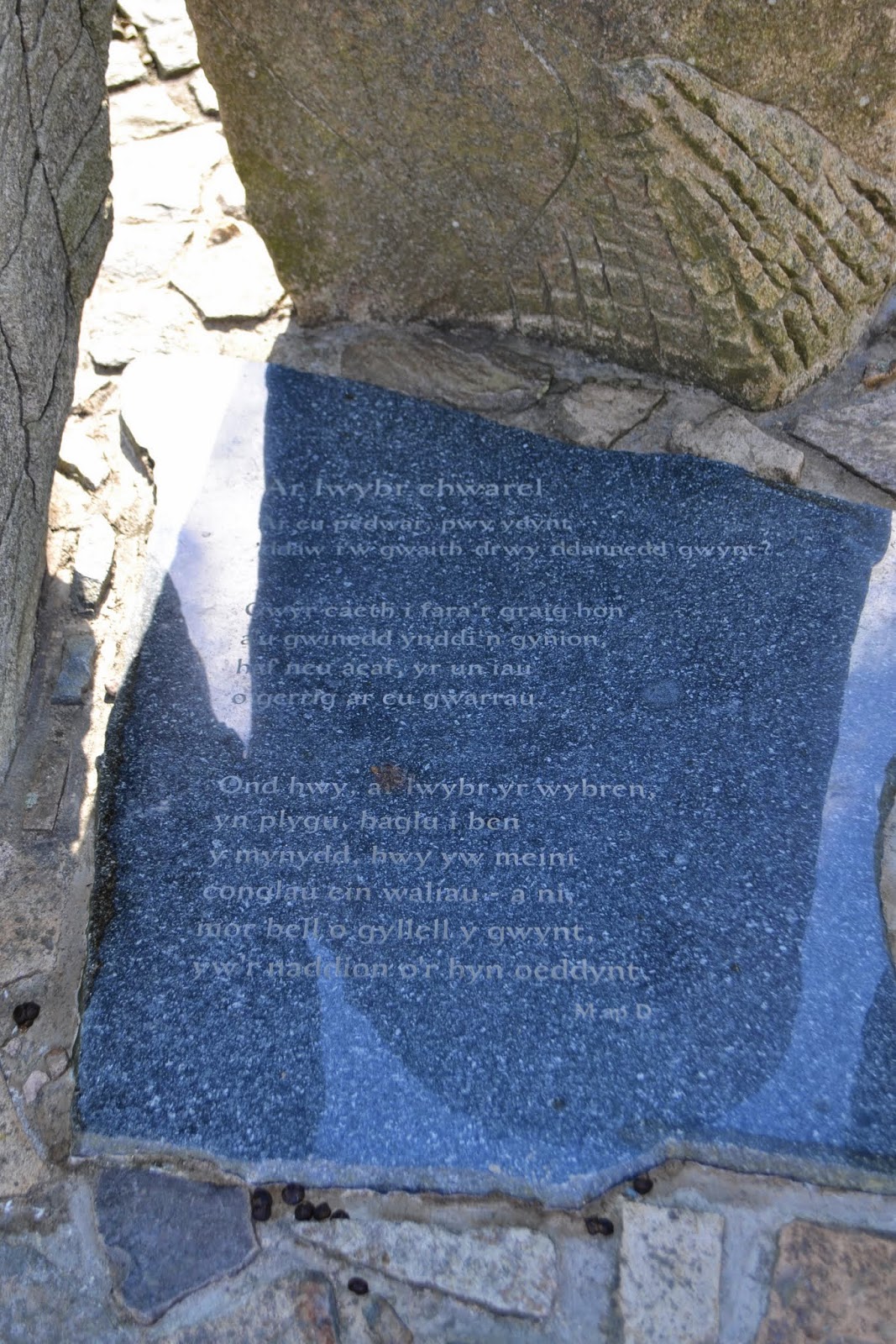 For those not familiar with the Language of Heaven, the poem roughly translates as follows:


On A Quarry Path

But they, on this celestial path
Bent, tripping to the peak
Of the mountain, they are the cornerstones
Of our walls – and us,
So far from the knife of the winds


Are the shavings of what they were


Posted by Walking North Wales at 07:32 No comments:

There has been a distinct improvement to the route of the Wales Coast Path in the section between Caernarfon and Clynnog Fawr. We have a number of customers who want to walk all the way around from Caernarfon to Porthmadog, some 95 miles in total, but we have always been a little apologetic about the first section of the route which has always entailed a lot of roadway. Tarmac bashing on the first day of a walking holiday can upset the feet and the old route that used the old railway track (now a cycle path) went too far inland to be considered a coastal route.

However the route has now been shifted nearer the sea after a bridge has been built over the Afon Carrog. This makes for a much better route. I walked it at the weekend and was really impressed at the landscape - more like fenland than anything else, a wonderful new experience.