Holt - the town that shrank!


I have been trying to find a better route into Wales from Nantwich avoiding Chester and Whitchurch. I hit upon the A534 and this led me to Holt, (an Old English word for an area of woodland and meadow), a place much smaller now than it was in the medieval period. 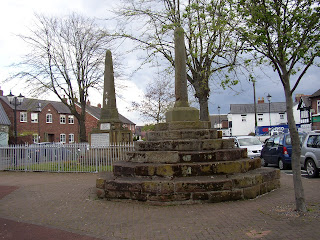 This bridge over the Dee once had strategic and commercial importance. Hence the Earl of Surrey built this bridge and new town following the Edwardian conquest and adorned the large market place with a Market Cross. It soon became one of the largest towns in Wales before the Black Death and the wars of Owain Glyndwr took their toll.

So, this is the famous Holt Castle, Castrum Leonis, “Castle of the Lion” It guarded this important crossing of the Dee. In its heyday following King Edward’s conquests it was an impressive structure-a regular pentagon of towers and curtain walling around a central courtyard. It was held for the Crown in the Civil War and was the last castle to be surrendered to Parliament in 1647. Thereafter, it was steadily dismantled and much of the stone taken to build Eaton Hall. Only part of the inner walls remains. The surrounding parkland contains some interesting meadow walks but all was flooded on my visit in late April.


St Chad’s is an interesting medieval church built of sandstone. The font dates from the 15th Century and shows the baronial arms of the various Lords of the Manor. The Stags head is from William Stanley who played a decisive part at the Battle of Bosworth but lost his head in 1495 when he backed the Perkin Warbeck conspiracy. In the South Aisle there is a fascinating brass memorial plaque laid out as an acrostic (where the first letter of each line spells the deceased’s name) and underneath is a skeleton with the terrible words “Me today, you tomorrow”. Thanks for that!

Posted by Walking North Wales at 01:39