St Mary's church in Nefyn ceased to be the parish church early in the last century. It was of ancient foundation but entirely rebuilt in 1807. Its distinctive weather vane marks it out as a maritime church and, sure enough, that is how it has remained. In the 1980s it housed the Nefyn Maritime Museum but problems with the structure forced this to close around the time of the millennium. It has been a struggle over recent years to find the money to renovate the place and to preserve the exhibits. Peter sat on the committee for a while, but every time any sort of grant got close to being approved the building estimates were already out of date and nothing was done. He was greatly heartened this morning to see that the roof was being replaced and work begun on the tower. This museum is right on the coast path so it will be an added point of interest - and perhaps a place to shelter if the weather looks threatening. 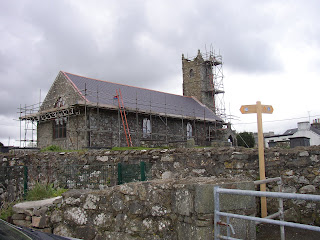 Posted by Walking North Wales at 07:05