The Gate to Nowhere?

Another recent addition to Manaros is the new back gate. This leads into a field at the rear of the patio and is part of our rebuild of the back fence aimed at improving the view. Gone are the briars and the nettles and the barbed wire. In their place is a nice tidy post and wire fence linked to a cleft oak gate made by our friends at Felin Uchaf, cleft meaning split along the grain rather than sawn. They now have a fully equipped workshop and are producing a series of design items which can be made on commission. The oak trees of Llyn tend to be from Sessile Oak or English Oak bent by the wind. This produces interesting shapes in the trunk and branches. This was particularly valuable in the old days when ship building was a busy industry in Portmadog and Porthdinllaen. We hope you like what it has produced here. 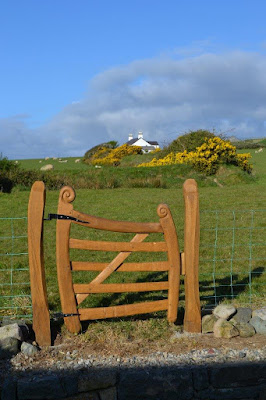 Posted by Walking North Wales at 08:25 No comments:

The Story Behind the Bowl

Recent visitors to manaros have admired a new addition to the ornament, a beechwood bowl, and often ask what is the story behind it. 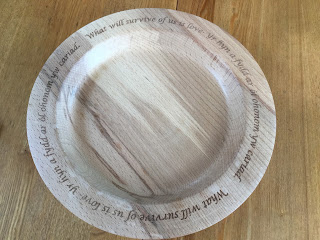 This bowl was made by Miriam Jones, a wood turner from Llanengan, a small village on Hell's Mouth. More of her work can be seen at www.Miriamjones.co.uk. This bowl was specially comissioned by us in Welsh and English. The words come from a poem by Philip Larkin concerning a tomb in Chichester Cathedral of Richard Fitzalan, earl of Arundel, and his second wife, Eleanor of Lancaster.

The hand guesture is unusual in a mediaeval tomb and leads the poet to reflect on what this meant, leading to his conclusion in the final line "What will survive of us is love." On learning of the likely cost of what politicians call "social care", Larkin may well be right!

Side by side, their faces blurred,
The earl and countess lie in stone,
Their proper habits vaguely shown
As jointed armour, stiffened pleat,
And that faint hint of the absurd—
The little dogs under their feet.

Such plainness of the pre-baroque
Hardly involves the eye, until
It meets his left-hand gauntlet, still
Clasped empty in the other; and
One sees, with a sharp tender shock,
His hand withdrawn, holding her hand.

They would not think to lie so long.
Such faithfulness in effigy
Was just a detail friends would see:
A sculptor’s sweet commissioned grace
Thrown off in helping to prolong
The Latin names around the base.

They would not guess how early in
Their supine stationary voyage
The air would change to soundless damage,
Turn the old tenantry away;
How soon succeeding eyes begin
To look, not read. Rigidly they

Persisted, linked, through lengths and breadths
Of time. Snow fell, undated. Light
Each summer thronged the glass. A bright
Litter of birdcalls strewed the same
Bone-riddled ground. And up the paths
The endless altered people came,

Washing at their identity.
Now, helpless in the hollow of
An unarmorial age, a trough
Of smoke in slow suspended skeins
Above their scrap of history,
Only an attitude remains:

Time has transfigured them into
Untruth. The stone fidelity
They hardly meant has come to be
Their final blazon, and to prove
Our almost-instinct almost true:
What will survive of us is love.
Posted by Walking North Wales at 08:01 No comments:

We have just seen the weather forecast for the next few weeks and they look as promising as they could possibly be given the uncertainties of forecasts. We have taken a lot of short term bookings at Manaros for June and early July and this has left us with some short periods which we are now offering out as short breaks at a 10% discount from our normal prices. These are:

As an added bonus the lillies in the garden will be out in June. This could be a great holiday for you and yours. If you would like to book please contact us on 01758 760 652. 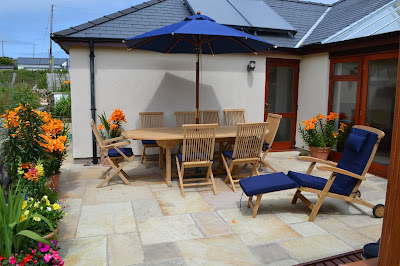 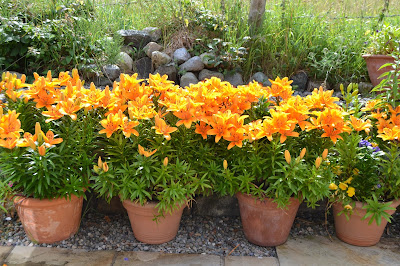 Posted by Walking North Wales at 08:49 No comments:

We are very proud to unveil this new video created in cooperation with all our colleagues who run high quality walking holidays on the Wales Coast Path. The film shows that it is now possible to walk the whole of the Wales Coast Path using the luggage carrying services of the various members of the Association.

We are hoping this film will do something to improve the marketing of the Wales Coast Path which has the potential to attract serious numbers of walkers to the Wales coast - perhaps to explore places other than the iconic scenic highlights. The strapline of the path is "Discover the Shape of a Nation" and there is much to be gained by walking the lesser known parts of Merionyddshire, southern Gwynedd or the Dee Estuary. Whatever your ambitions, do please share them with us and we can give good advice.
Posted by Walking North Wales at 08:01 No comments: