Fire on the Llŷn!

While driving around the end of the peninsula the other day, we noticed that there were quite a few plumes of thick smoke rising from the upper areas of Mynydd Rhiw and its surrounding hills. 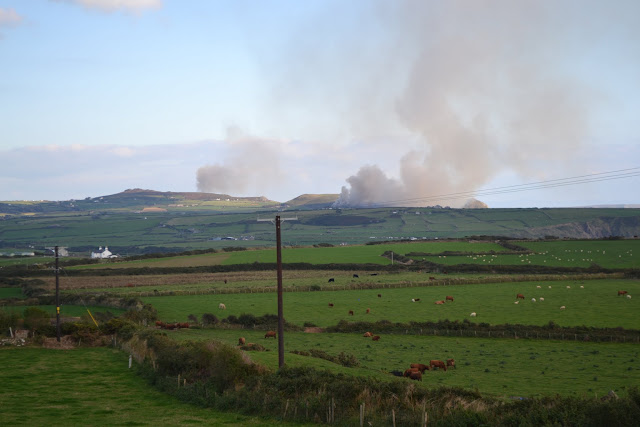 Alarming as these may seem, they are actually a normal occurrence around this time of year and are actually a deliberate tool of land management.  These slopes are covered in a distinctive mix of heather, bracken and gorse, which supports a unique mix of wildlife. Without a regular programme of burning the heather would first become woody and over grown, and then eventually be replaced by more and more shrubs and trees until the land reverted to forest which is the default state or "climax vegetation" for the British Isles. While woodland is, of course, attractive and desirable in itself with its own different mix of wildlife, maintaining the heather heathland in this way brings a rich variety to the landscape and enables it to support more and different wild species than it otherwise would. The fires generally move quickly and burn out fast, which prevents the soil and roots of the heather being damaged so it can quickly send up new green shoots. Traditionally these shoots were encouraged to provide food for shooting birds such as grouse, although I don't know if much shooting for sport goes on around here these days.

Another 15 minutes of fame for Porthor

You may remember seeing Porthor, or Whistling Sands beach featured on the BBC programme Coast a few years ago. This kind of thing is always good for the area as it raises public awareness of it as a possible holiday destination. So, when Peter and I were asked for some advice on what to film by a TV production company doing a feature on walking the Wales Coast Path we were more than happy to help out. The programme will be coming out next spring on Channel 4 and this will be one of several segments in the programme including walks in Dorset and Pembrokeshire, each visited by a different celebrity. In the Llŷn's case this was Ben Fogle, who brought his very friendly one year old labrador Storm along for the walk.


The weather was a bit temperamental, but fortunately stayed dry enough for them to film. The first stop was the eastern end of Porthor beach.


The crew planned to carry on to Mynydd Mawr to take shots of the classic view of Bardsey before walking north to Porth Meudwy to interview Colin Evans, the Bardsey Boatman and then to Aberdaron itself. We're very much looking forward to seeing some of the peninsula's spectacular scenery on screen next year.
Posted by Walking North Wales at 06:43 No comments: