If you didn't see the program on the beautiful walk that presenter Julia Bradbury took to Llanddwyn Island on Anglesey then it's well worth checking out online. You'll have to be quick though as it's only available for another 27 days or so. You can find a link to it here.

While the programme did an excellent job of showing off the magnificent view of the Llŷn Peninsula across the Menai Strait, the one area that it fell down was Julia's pronunciation of Welsh words. Julia even admitted during the show, and later on twitter, that she regretted her inability to pronounce them properly. Even we, as incomers to the area, winced a little when she referred to the "Thlun" Peninsula, so we can only imagine how a first language Welsh speaker might feel. To help any fellow learners out, we thought we'd offer some tips on how we learned to make a reasonably good pronunciation of the word.

If you break down the word Llŷn into its components is's actually not difficult. The initial double-l is a letter in its own right in Welsh, so Llŷn is really just a three letter word. The best way to pronounce it is to put your mouth into the shape you would use to say l, but then put your tongue behind your top front teeth and hiss. This sound doesn't exist in English, but if you find it difficult you can cheat a little and pronounce it as though it starts with a "th". It's not quite the same though.

The next part is the y with a little hat over the top of it that is commonly known as a "to bach" or "little roof". Y is actually considered a vowel in Welsh and so helps glue the consonants at the beginning and end of the word together. Vowels in Welsh can sometimes sound similar to each other and in this instance the y is pronounced a bit like the letter i in the English word "it", but with the to bach indicating that the sound should be elongated, like a double letter in English. (This is actually important because the word Llyn, without a to bach, is pronounced differently and is a completely different word meaning "lake").

Lastly the n is very easy as it is pronounced just the same as in English. Put them all together and it comes out a little like "Thliin". To be really authentic you need to develop a proper Welsh accent and perfect the double-l hissing sound, but at least the above is reasonably close.

Welsh spelling can seem a little daunting to English speakers at first glance, but as you become more familiar with it you realise that it is actually quite consistent, with letters usually making the same sound wherever they are found and with very few silent letters. The few exceptions we can think of are the silent g in the word "gwlyb" - meaning wet, and the slight variation in how the letter y is pronounced depending on its place in a word - for example pronouncing Aberystwyth as "Aber-us-twith".

And let's face it Welsh is hardly the worst offender in this category. Why do we add all those extra letters in Gloucester when we're only going to say "Gloster"? Why isn't Arkansas spelled with a w? And why do we pronounce the Vale of Belvoir as though it's home to large, dam-building rodents? Answers in the comments please...?

One last comment, Julia, Anglesey is a special and beautiful place largely because it has great views of Snowdonia and the Llŷn. Please, next time, come over to the Llŷn and we will show you the real thing itself, something truly exceptional.
Posted by Walking North Wales at 08:12 3 comments:

Edge of Wales goes to Edge of London 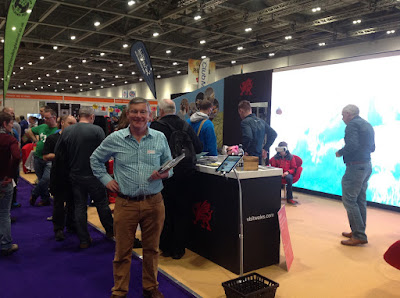 Never willing to forgo the opportunity to promote our business, we were delighted to be invited to join the Visit Wales stand at the Telegraph Outdoor Show last weekend. This was held at the Excel Exhibition centre in a particularly soulless part of Docklands which could only be reached by using the Docklands Light Railway. Places such as Poplar look much less endearing from the train than they do on Call the Midwife. 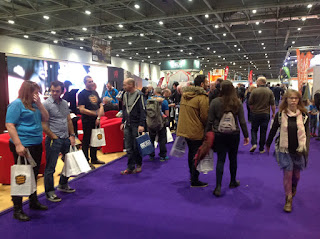 The Show was very popular and the whole Welsh team worked hard all day promoting the delights of Wales. Peter worked alongside Rob Holt, Harry Corin and Claire Carew of Visit Wales, Huw from Caernarfon TIC and Mike Smart from Always Aim High. There was also staff from South West Wales from promoting Dirty Weekends and Celtic Coasteering- shown here on the left. 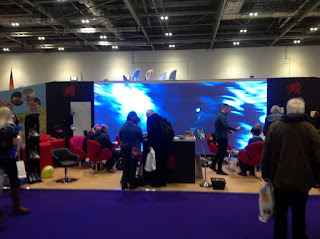 Dominating the huge stand was a giant video screen with scenic and action sequences which were jaw dropping and demanded attention. 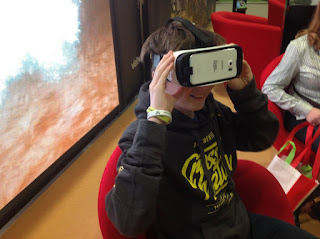 These goggles were a great draw. When worn they put you in a world of your own and the scenery changed as you looked around. 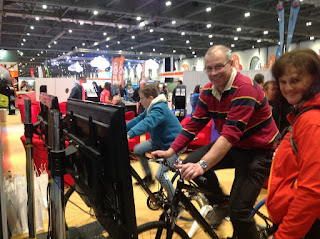 Increasingly the Outdoor Show is a venue for cyclists who can drool over the latest technology in bikes, but there were also a lot of families some members of which were getting into mountain biking and these proved to be fertile ground for our two properties Manaros (which sleeps 8 in 4 en-suite bedrooms) and Glandwr (directly opposite the beach, sleeps 6 and perfect for families on a budget). 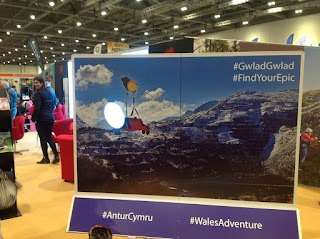 The emphasis on the Visit Wales stand was on adrenalin sports, as is most of the literature for Year of Adventure. We hope that the tourist authorities are aware of just how small a market this actually is. However, the stand caught the attention of passers by and, in conversation, we were able to reassure people that you didn't actually have to scare yourself stiff everyday in Wales. There are good things to do in walking, relaxing in cafes and on beaches and visiting places of interest.
Posted by Walking North Wales at 05:38 No comments:

Down in the Valley

In our last blog post we reported on how much the Wales Coast Path to the east of Aberdaron has been improved by moving it closer to the coast. While we were out we also checked out the section that connects Aberdaron to the start of the new route at Morfa Mawr. This path follows the river Daron at the bottom of its valley, and enables walkers to almost entirely avoid walking on tarmac roads. We walked it in an east to west direction back to Aberdaron. It's a very pleasant little valley, but the route can be muddy at this time of year. Walkers should take care as livestock can be found on some parts of the route.
After coming up from the coast we crossed the road at Morfa Mawr and followed the signposted route at the edge of the field to the kissing gate in the bottom left corner. We then continued downhill on the (at the moment muddy and slippery) slope to the bridge over the river itself.


Posted by Walking North Wales at 08:39 No comments: