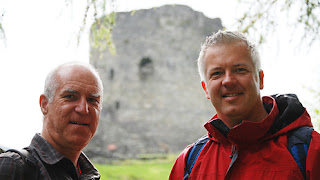 There was another excellent episode of Weatherman Walking, starring Derek Brockway on BBC Wales last night. Derek visited Llanberis, but instead of following the herd up Snowdon, or taking the lazy way up using the steam railway, he decided to head north east from the village into the old quarry workings. He was accompanied by former punk rock musician Rhys Mwyn, who now works as a guide sharing his passion for Welsh history with visitors to the area.

Llanberis is only 7 miles from the coastal town of Caernarfon, so is easy to reach via the A55 from the north of England. The paths up Snowdon itself are some of the busiest in the UK, but as Derek found there are some equally spectacular walks to be had nearby with far less foot traffic.

Rhys took Derek first to Dolbadarn Castle. This circular tower was built by one of the last of the native Welsh Princes Llewellyn the Great, before passing to Llewellyn the Last, from whom it was captured by the forces of Edward the First of England. The tower is in an imposing position controlling the pass into the heart of Snowdonia.

The two then moved on to the National Slate Museum, this was a working quarry until 1969, and it still feels as though the workers have just downed tools and left. They then passed the water filled Vivian Quarry, which has now become a popular spot for outdoor pursuits such as climbing and diving.

Derek and Rhys then crossed the bridge over the Lake Railway and visited the quarry hospital, which was built in the 1860s to treat some of the horrific injuries that the quarrymen often suffered.  Although it seems primitive today, the hospital was actually the state of the art during its lifetime, and contains one of the world's first examples of an X-Ray machine.

Next stop was one of the last remaining fragments of the Royal Forest of Gwynedd composed of Sessile Oaks. These trees are a stunted form of oak that survives in harsh conditions on poor soils. They have survived the clearances that have affected the rest of Snowdonia due to the steepness of the slope on which they were situated. The thick carpet of moss over their branches gave the forest quite a primeval feel.

The Anglesey Barracks were next on the itinerary, so named because they were accommodation for men from Anglesey who lived there during the week before heading home at noon on Saturday for some precious time with their families before returning early on Monday morning. The cramped single storie buildings were home to 4 men each, before they were declared unfit for human habitation by the board of health and abandoned.

The last section of the walk took Derek and Rhys back to Llanberis down the steep incline that used to hold the Tramway that carried raw slate down to the workshops.

The entire walk is available as a pdf map here. 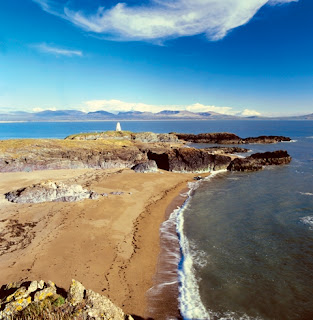 The 25th of January is St Dwynwen’s day, the patron saint of Welsh lovers. Recently a tradition of celebrating St Dwynwen’s day as our equivalent of St Valentine’s has become established. St Dwynwen herself was an early Celtic saint who lived in 5th Century Anglesey.

There are a few variations in St Dwynwen’s legend, but the most common one is as follows:

Dwynwen was a young woman who was in love with a young man named Maelon, but Maelon betrayed her trust by forcing himself on her. After praying for assistance, an angel provided her with a potion, which enabled her to forget her love for Maelon, and which punished him for his crime by turning him into a pillar of ice.

Taking pity on Maelon, Dwynwen then prayed for three requests. Those three requests were that Maelon be released; that, through her, God would look after all true lovers; and that she herself should remain unmarried. She then retreated to the solitude of Llanddwyn Island off the west coast of Anglesey to become a hermit until she died, in about AD 460.

A rather sad tale for a patron saint of lovers.

Llanddwyn Island itself is in a beautiful location on the south west corner of Anglesey. The island can in fact be walked to from the mainland at low tide, and is the site of a small church. There are lovely views across the sea to Snowdonia, and a charming little lighthouse nearby, which was used as a location for the (rather indifferent) Demi Moore film “Half Light”.

The area is a good base for walks.

Posted by Walking North Wales at 08:07 No comments: