I have been spending more time than usual recently in the churches of North Wales. When I am out on my walks I always call in to a church when I pass and hope to find it open. I will be particularly active in September because Conwy and Gwynedd are running a series of open days for churches and other public buildings. One of the things that has cropped up that I didn't expect was mention of Leprosy in the Middle Ages. During the Middle Ages, Church Law required that those suffering from Leprosy were separated from the rest of the population by a ritual “burial service for the living”. The priest would throw earth from a spade at the sufferer’s feet before leading him or her from the church covered by a black cloth. The sufferer would literally be considered a “dead man walking”. So that those suffering from Leprosy could still witness the eucharist, special windows were often cut (called leper windows or squint windows) this meant that the afflicted could see the eucharist but the congregation could not see the lepers and was out of infection range. The best example I found is the tiny pilgrim’s hospice church at Pistyll, dedicated to St Beuno. This is typical of the basic single knaved Llŷn Church with a single bell. Though founded in the 7th Century, the present structure is probably 12th Century with a small extension at the Eastern end in the 15th Century. Services are still held in the church. It is popular for weddings and holds the traditional Lammas service in early August-a sort of early harvest festival held to celebrate the first ripe grains of wheat, the centre-piece of which is the offering of the unleavened Lammas bread-a hope offering for the harvest to be safely gathered in.  On special holidays the church floor is strewn with wild flowers and herbs-survivals of Dwarf Elder, Hop Vines and Danesberry (meant to assist journey into the afterlife, the transmigration of the soul) that are still growing in the churchyard -flowers and herbs which were used to treat the sick Pilgrims in Medieval times and before modern drugs arrived. On the nearby hill to the northeast was once located a hospice “Cefnydd” which gave its name to the farm there today. Nearby is a field called Cae Hospice Pennla where lepers were housed. 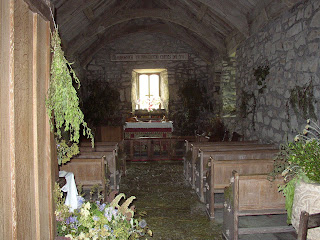 150 metres East South East of the Church is the remains of a Holy Well now covered by a concrete slab. Features to look out for in the Church are (1) the Welsh inscription painted over the altar-“Sing the praises of the Lord for he is Good”(2) the leper’s window, a small window opening in the North Wall from where lepers could sit outside and watch the service- but in such a way that the congregation were spared the sight of the lepers.-often called  a “squint window”(3) the ancient font adorned with the Celtic continuum pattern, symbolic of “Life without ending or beginning” (4) the remains of beef fat and lime plaster on the North Wall, a survival of plaster and paintings which would have once covered the whole church. This one is thought to have depicted St Christopher. 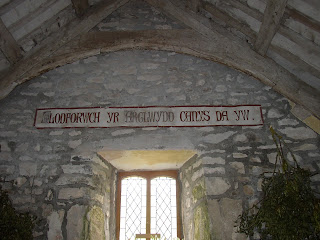 An inscription “Alleluia in Gothic type and DDL (1050 AD in Roman numerals was also traced (5) the remains of a small ledge about knee high which can be seen in the wall around the altar. This is a survival of a wall seat that would once have run around the entire church, and did so in all medieval churches before being chiselled out in Victorian times to enable wooden pews to be fitted snug to the wall. In medieval times the congregation was expected to stand or kneel. Only the old and weak would sit down on this ledge-hence the expression “let the weakest go to the wall”(6) You can see the entrance to an earlier form of the building in the form of steps jutting out from the base of the south wall. (7) The grave of Rupert Davies, the actor who played Maigret, the French detective in the 1960’s TV series. His tombstone is by the wall in the highest part of the graveyard. (8) The roof was thatched with rushes until the 19th Century, the holes through which the ropes tethering the sheaves can still be seen in the roof timbers (8) Slightly upstream from the present millpond (thought to have been once a fish pond) is the holy well that served the Church. 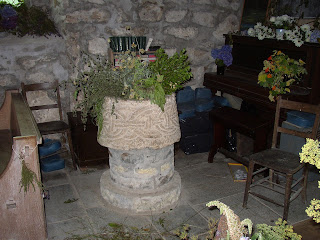 Posted by Walking North Wales at 02:00