What are you doing this weekend? If you are going to be in the area of Caernarfon / Nefyn then why not book a place to celebrate Nant Gwrtheyrn's 30 anniversary as a language centre. The celebrations will start at 1.30pm on Sunday the 30th of September. There will be a slide show to start, followed by a party attended by Dr Carl Clowes who founded the project 30 years ago. 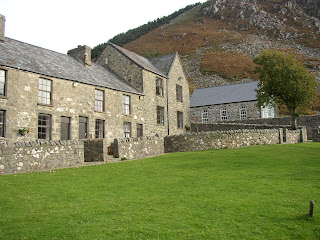 Porth y Nant was once a thriving mining village, but was largely abandoned and fell into disrepair after the quarry closed following the second world war. The village was given a new lease of life in 1982 when a group of tutors and students gathered in one of the newly renovated houses to learn Welsh.

Nant is now on the route of the Wales Coast Path, and Caffi Meinir is a great place to stop for a cup of tea while passing through.