The Legend of Dic Aberdaron

One of North Wales' most colourful historical characters was the amateur linguist Richard Jones, who lived from 1780 to 1843 and was known as "Dic Aberdaron". Dic was a self-taught polyglot, who claimed to be fluent in fourteen languages. He had a cottage in Aberdaron, the site of which is marked by a plaque, but he is buried in St Asaph. 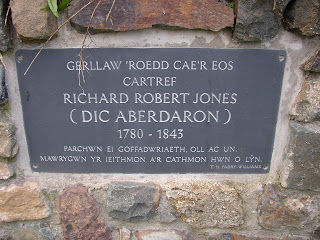 As talented as he was Dic could never settle in one place for long and died in poverty. The author Jan Morris discusses his legacy in this extract from her book "A matter of Wales".


"Richard Jones was in all respects a complete failure. He is famous not so much for what he did, as for what he might have done, not for his triumphs over adversities, like most national heroes, but for his patrician refusal to adjust to them. He was born in 1780 the son of a fisherman, and for a time took to the sea too, but early discovered in himself a precocious gift for languages, and this was the end of him. He gave up gainful employment for the rest of his life, and instead took to wandering around the country learning new languages, translating foreign books and working upon ephemeral literary projects.


He was the very image of a tramp. Thickly-bearded, floppy-hatted, often wearing a brilliantly bright blue Dragoon’s jacket with silver epaulettes, generally bare-footed, nearly always filthy, accompanied more than likely by an adopted stray cat, with a harp and a horn slung over his back and every pocket of his raggety coat bulging with books - accoutred thus, he was a familiar figure in the lanes of North Wales, at the houses of country gentlemen or parsons where he stopped for sustenance and intellectual encouragement, on the waterfront at Liverpool, where he liked to practice his languages on foreign sailors, in the drawing-rooms of London Welshmen and even in Dover, where he enjoyed expressing horrifyingly subversive views to the soldiers of the garrison.


Dic was described by a contemporary as “innocent as a child, but cunning as a serpent”. He is said to have mastered fourteen languages, and to have had a smattering of many more, and he was greatly respected in his own lifetime for his prodigious self-taught intellect, but he was also a sponger, a squabbler, and a distinctly unreliable protégé. Time and time again, he was befriended by men of substance, who often put him up for a time, lent him books or money, or commissioned translations from one language or another. He let most of them down, in one way or another, and was engaged almost all his life in quarrels and recriminations.


It is often impossible, even now, to disentangle his truth from his fiction. Could he really speak all those languages? If he knew their words, did he always understand their meanings? Possibly not, but now as then people prefer to give him the benefit of most doubts, so that to this day Welsh schoolchildren are taught to view him with respectful regard. Dic’s only lasting creation was a mammoth Welsh-Greek-Hebrew Lexicon, never alas to be published, but there are young Welshmen still who see this way of life as admirable - a life full of aspiration and private satisfaction, but utterly outside the usual canons of success. Dic owned nothing at all but his books, his harps and his horn, and he lost most of them at one time or another. He died in 1843, and despite his atheist beliefs was buried in the churchyard of St. Mary’s church at Llanelwy [St. Asaph] in Denbighshire, where admirers who go to shed a gentle tear and wish Dic’s vagrant spirit well, will find this englyn, by Ellis Owen, carved upon his tombstone:


A linguist eight times above other linguists - truly he was
A dictionary of every province.
Death took away his fifteen languages,
Below he is without a language at all."

Speaking of multiple languages, Peter has been having to brush up on his French and German recently as we have had customers from Europe completing the Edge of Wales Walk in Aberdaron. Visitors from other countries might like to look at our overseas operators page, for companies that can organise holidays in Wales.

Posted by Walking North Wales at 06:04