CCW on the Job!

Blog readers will be aware of all the improvements that have been made to the Wales Coast Path in recent months under the direction of Quentin Grimley at Countryside Council for Wales. But even I was impressed to meet Quentin again for the third time in as many months out on the trail on Wednesday 22nd of August. 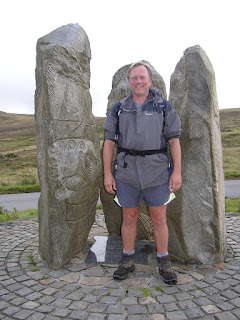 He was striding over the Yr Eifl hills towards Nant Gwrtheyrn and I caught up with him at the memorial stones. In the middle of the three standing stones is a flat slab inscribed with a poem in Welsh. 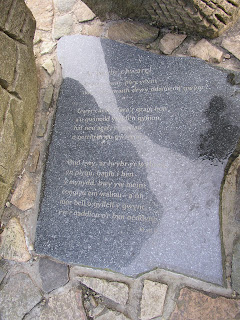 Here is the translation into English.

On A Quarry Path

But they, on this celestial path
Bent, tripping to the peak
Of the mountain, they are the cornerstones
Of our walls – and us,
So far from the knife of the winds
Are the shavings of what they were
Posted by Walking North Wales at 08:30